The Top Gear Challenge and Road Rally was, in typical Jackson Style, sunny, spontaneous and a little crazy–although not necessarily in that order. 27 members and 13 cars made for an adventurous afternoon. With 5 separate challenges, no one knew what to expect.

The first challenge consisted of Jackson’s first ever Councourse d’Elegance. It wasn’t an easy pick, yet the categories weren’t exactly what one would expect. The winner for the car you would “most like to steal” went to Dick and Val Becks 1956 Speedster. The car that won the “wax on/wax off award” went to Frank and Kathy Forelle for their 1960 356 B Coupe. The winner of the car “I’d most like to date” went to John and Connie Hansen for their bright yellow Pantera–even if the stipulation was only for a one night stand. The car that “makes you want to buy a BMW” went to Mike & Kristy Mielke for their ever fine Oldsmobile 911 Turbo. And the vehicle that “you would like to keep forever” went again victoriously to Dick and Val Beck for their beautiful Silver Speedster.

The second challenge was an emulation of last years rally, a picture scavenger hunt, but did not seem to be as successful. Many members showed up at the destination of Owen Bircher Park in Wilson not having found hardly any of the pictures at all. The saving grace was Buck and Shelley Fairbanks who successfully found every picture and spelled the word “Porsche” in the exact sequence dictated.

Event number 3 was to find the shortest distance from the park in Wilson to the Mike Yokel Park on East Jackson. However the directions were not that easy. Along the way members were required to find a piece of chocolate, the physical location of an Emerge-care or Urgent care facility in Jackson proper, and a brochure from a Jackson Hole summer activity for 2011. All members showed up with items in hand, but the winners for the event went to Robert Baltensperger and his co-driver Heide, Buck and Shelley Fairbanks, and Lou and Margaret Hochheiser for successfully navigating the 7.0 mile distance.

Challenge number 4 was a mini-autocross that seemed to be the highlight of the trip. Taking place at the Mormon Church on Gross Ventre and Broadway, even a few of the members of the Church seemed to like it as they watched anxiously from the curb. Roy Kinsey in his 2009 Boxster took third at 27.65 seconds, Mike Faems took second in his 993 911 Turbo at 26.34 seconds, and Greg Wallace took first in his 993 911 turbo at 26.25 seconds.

The final event took place at the Craig Thomas Visitor Center were members were able to peruse the center on a self guided tour and answer questions on history about the area. There was, however, some contention on the answers, as even the hosts of the center were confused. The winners for the center were Tom Barker and his two grandchildren, Ethan and Anna who scored a perfect 5 out of 5 questions.

Not to dismayed. The event was a tremendous success. Taking third place with 16 points total was Frank and Kathy Forelle. Taking second place with 19 points were Buck and Shelley Fairbanks. And taking first place, finally (after 5 long and arduous years), was Dick and Val Beck with 20 points. And on that bombshell, the smile on their faces was priceless. 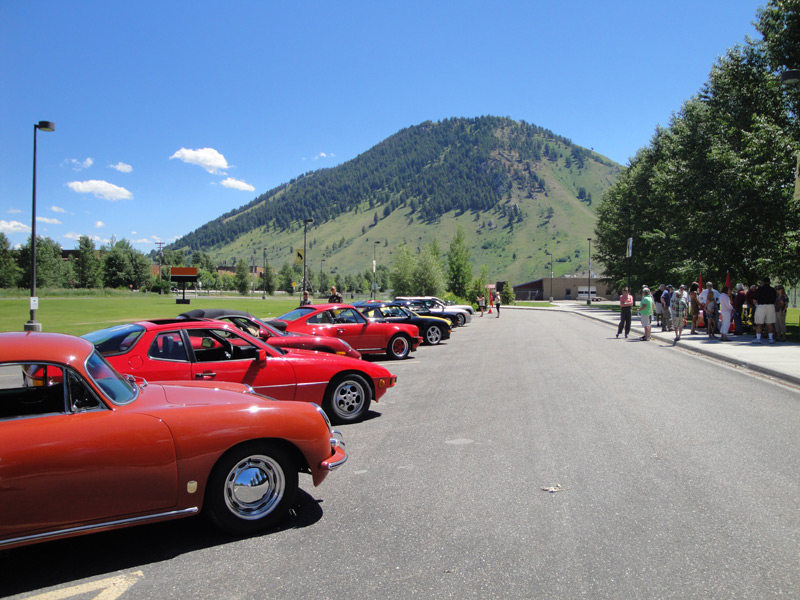