It was an early Saturday morning in the beginning of August.  It started out just like any other. Alarm goes off at 6, hit the snooze and then again.  Get up, brush my teeth .  Go Colgate!  Find the leash and a take the dog for a walk.  Sniff, sniff, pee – sniff, sniff, pee.  For breakfast a piece of toast and the Quiche that’s been in the fridge for two days .  Shower.  Soap, Shampoo, rinse and repeat.

Pack the bags.  Change of clothes, sun tan lotion, bathing suit and my flippity floppities – check.  Pack the cooler.  4 bottles of vino and two 12 packs.  That should be good.  How about some water. Ok, Pelligrino it is.  Waivers, got em.  Money, yup.  Phone, got it too.  Car keys, yup.  Looks like I’m ready.

Ready for what is the question.  I really had no clue.  We met at the Visitors Center on North Cache.  Six cars and nine people dressed for a day at the Hamptons.  JJ Batazel showed in her little white Boxster, dressed appropriately in some fine linens and those big summer glasses.  The Stockhouse twins in their blue 911, Jim in his finest Hawaiian gear and Nancy in a blue hat ready for the sun.  The Browns showing in their Cayenne, Charlie in some very Marlyand-esque Ivy league shorts and Kitty in her finest boating attire.  Roy Kinsey showed in his token Audi Allroad, which by the ways is a rather nice car for these parts, and he brought his friend Anne who just happened to be celebrating her birthday.  We had Greg Wallace who joined us as well and was driving his Pick-up that just happened to be sporting a very long and, unbeknownst to me, powerful little toy boat.

Only it wasn’t the Hamptons we were headed for.  It was Jackson Lake in the Grand Teton National Park.  We started our cars and toured together to the lake.  Stopping at Leeks Marina for a lunch, we sat outside under the umbrella’s for some pizza, salad and a few pre-game cocktails.  It was there that the party started.  Dan and Nancy Clancy had their 28 foot boat parked dock side ready for the crew.   Anne Fish had the Jim Wunsch Dingy ready to take on passengers as well.  We loaded day-bags and coolers and were off.

Meeting at North Elk Island, the Clancy’s boat “Indian Summer” anchored in the middle of the bay.  While we waited for the others to show, the socializing began.  Sitting on the back deck and then making our way to the top deck, the rounds of conversations took place amongst drinks and great laughter.  Slowly but surely our comrades arrived.  Jim Wunsch and Anne Fish brought Jim and Nancy Stockhouse in Jim Wunsch’s un-named 24 foot searay.  Along with them, they brought the Stockhouse’s toys, two luxury inner tubes with cup holders and headrests and two portable Kayaks.  Docking alongside the Clancy’s, we tied the boats together for a day of mixing and mingling amongst the vessels.

Shortly to arrive was Eric Weber in his beautiful Reinell cruiser, who happily joined us to add to the calamity. Greg Wallace arrived shortly thereafter in his little boat that could.  It wasn’t long before we had 4 boats tied together taking over the bay.  It was a crazy little bunch of people boat-hopping and talking that made for so much fun.

Then the phone call came.  It was Kristy Welfl and her son Bailey that had arrived and needed a ride from Leeks Marina.  Greg offered to retrieve them and Charlie Brown and I volunteered to go along for the ride.  Having had my share of libation, I was happy to join them.  With a start of the engine and a loud ruckus, Greg informed me he had 1156 horsepower on hand.  That’s Bugatti Veyron territory, I said.  He simply shook his head with a smirk and a devilish grin.

Before I knew it, we were off skimming across the wake.  Skipping from crest to crest, it seemed the faster we went, the smoother the ride became.  However, not having a seat belt or a windshield was very apparent when Greg pointed to the Speedo.  That little round dial measured miles per hour via GPS.  The pointer was sticking very close to 95 and at the same time I noticed the death grip I had on the hulls of the boat.  I prayed with the same fervor of Ricky Bobby hoping for just one more day and before I knew it, we arrived at Leeks Marina.  I was hoping no one noticed my newly attained LA Face lift.  Having checked myself, I realized I was still alive and baby Jesus had granted my wish.  Looking around, I also realized I was ready to do it again.

It wasn’t long before Kristy and Bailey showed up.  Boarding Greg’s little boat I knew they were in for a treat.  Once again skimming across the wake, I noticed the death defying look on Kristy’s face, the same one I had moments earlier .  With her glasses glued to her head, she ended up wearing the soda she brought along for the ride.   It was Bailey however, after trying to help his mom keep it together, who realized the futility and began laughing in hysterics at the chaos that just ensued.

Back at the boats, we joined the crowd once again.  It wasn’t long before the 80 plus degree weather took its affect and the toys started to appear.  The kayaks were out and if I recall correctly, Nancy Stockhouse and Kristy were the first to show us how it was done.  I know that Charlie Brown took a tour as well and definitely seemed to be enjoying himself.  Jim Stockhouse and I ventured off on those luxury inner tubes, although being tied to the boats we didn’t float far.  Jim Wunsch had his dingy out (no I mean the little boat he pulled behind his big one) and he took trips around the bay.  Bailey got his first driving lesson at the ripe age of 14. And proud to say both he and us survived.

Kristy returned from her kayak ride with a bag of freshly picked huckleberries.  In our jealous outrage, Anne Fish and I took out the kayaks to find our own pickings. The tour of the bay was beautiful with wildlife a plenty.  The Pelicans and Blue Herons resting peacefully on the shoreline were a sight to see.  Not having any luck finding any huckleberries of our own, Anne and I returned to the party barge.  Now in full swing, it was Anne that was ransacked by enemy fire and capsized gracefully.  With cocktail in hand, not having spilled a drop, she certainly was awarded the MVP for the day.

The party continued into the late afternoon hours.  The noise level was at a high and the conversations continued.  I can’t even tell you who talked to whom, nor what was said.  All’s I know is that everyone seemed to be having a great time.  I know I certainly did.

Sadly, before the sun set, the party was ending.  And before I knew it, Greg was taking people back to their cars in his little boat that could.  Fortunately for them, I also knew secretly, that he was about to take them for their second joy ride that day. 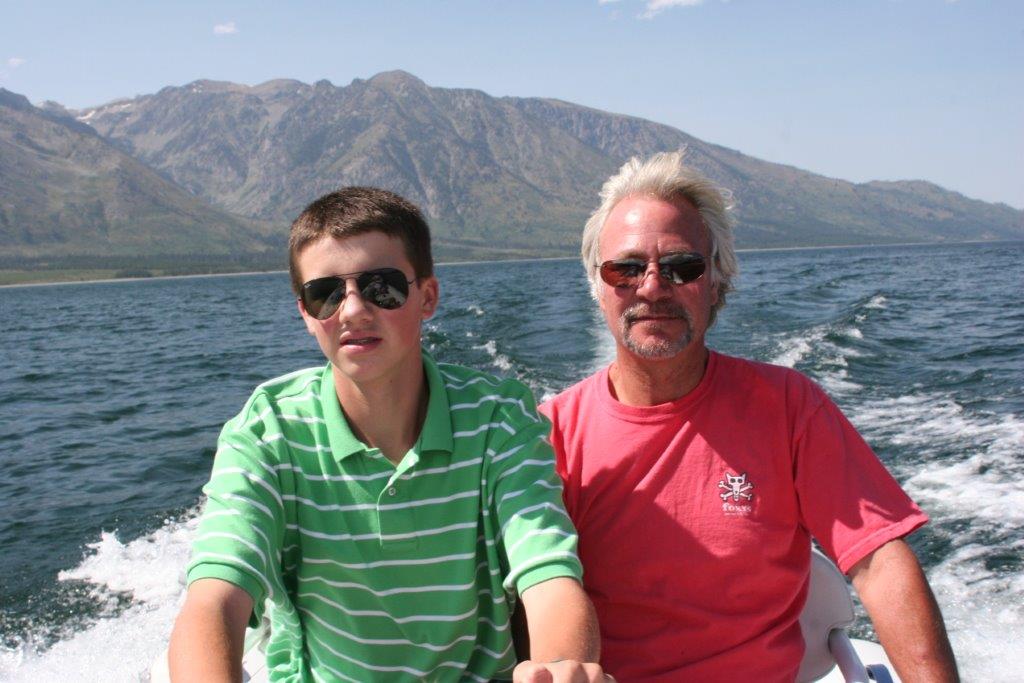