For weeks Jackson Hole had suffered from a dreary, view-obscuring, heavy smoke haze, due to the big wildfires in Idaho and California.

But the morning of our summer picnic and barbeque, August 18th, dawned bright & sunny, and though not quite crystal clear, much better than what we had endured over the last three weeks.

And 2012 we were in for something different from recent summers. Instead of the moveable feast we’d enjoyed over the past few years, this year the board decided we would kickback, relax and party in one place.  The venue was the Picnic Pavilion at Owen Bircher Park in Wilson, for an old-fashioned summer picnic. 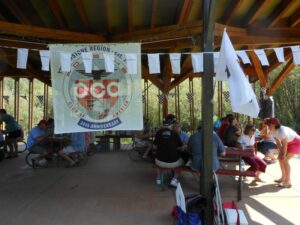 Our event coordinator extraordinaire, Shelley Fairbanks, did a wonderful job organizing and prepping the festivities. There were plenty of liquids, both unleaded and high-octane, to keep us hydrated under the suddenly clear mountain sky.  Games were set out in the park.  The Yellowstone Region faithful filled the picnic table with yummy salads, snacks and desserts. Best of all, Bubbas Bar-B-Que was there, serving barbequed chicken, brisket, beans and slaw.

We had a great turnout of Yellowstone Region regulars as well as new members to enjoy the plentiful food, drink and sunshine.

Kevin Cao, along with buddies Brad Winters and Cliff Cummings, made the trip from Pocatello in Kevin’s new Cayenne.  Steven and Barbara Dolphin journeyed over the Pass from Idaho Falls to be with us as well. 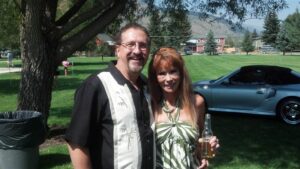 Parked front and center, between the volleyball net and the dessert table, was Mike Mielke’s gorgeous 996 Turbo Cab. Many conversations centered around it, not only because it was a beautiful example of the marque, but because it had ‘For Sale’ signs plastered all over it.    Inquiring minds wanted to know “Why?!!!”  Mike merely said it was time to move on to a different Porsche.  However when asked if a dedicated track car was in his future, Mike smiled wistfully and a faraway look came over his eyes. 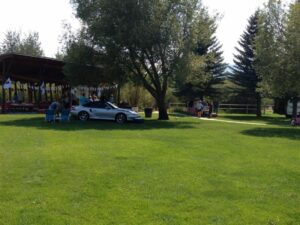 All-in-all, a wonderful summer afternoon. Many members commented on how enjoyable it was to share a good meal and just relax with good friends.  And of course, enjoy the sun.

(Interestingly, the smoke haze was back by Sunday Morning, thick as ever.