It was a beautiful August 24th when 39 members, spouses and friends queued their cars in front of Kitty & Charlie Brown’s home for the start of the Yellowstone Region Annual Progressive dinner. It was a sight to see.  There were even many spectators slowing down on Spring Gulch Road as they drove by to admire the nice collection of Stuttgart’s best. Included in the foray was a Jag, a BMW, an Acura & I think even an American car that was also in the mix.

The group was met by the smiling hosts, who must have been involved in early sangria tasting, and a beautiful appetizer display. With the Sangria & lemonade flowing, everyone settled into mingling, eating and drinking. The appetizers were absolutely wonderful which showed as the prepared culinary treats teased the taste buds and were consumed to extinction.

The croquet match that ensued started as a jovial match amongst friends. It did not take long, however, to find out who had it and who did not. Not being any kind of expert on this, I could only sit back, watch as the field of 3 teams began to do jump and foot shots through the wickets on their way to their goal of hitting the stake. The directions themselves were almost as confusing as the rules for Elephant Polo. Of course, house rules prevailed and so did Charlie Brown and Dan Clancy.

From Kitty & Charlie’s, we took a short drive to Margaret & Lou Hochheiser’s home which backs up to open space and an elk migration corridor. Again, beverages and mingling ensued until the dinner bell, which brought us face to face with some of the best tasting beef tenderloin that I have had in a long while. Not being one to wait in line, I took my sweet time to make it through the food line. So, while everyone found their place either on the outside deck or the formal dining table, us slackers, Eric, Scot, Elaine and myself, were relegated to the kiddy table. We soon were joined by those on the deck as it began to sprinkle outside, just enough to water spot our cars but not dampen our spirits. As we left, it was hard to not notice the grandeur of the Tetons looking down on us.

At this point, it was time to move on to our last stop, the Dessert at Nancy & Dan Clancy’s. There are several ways to get there, and I took the shortest route possible, down Spring Gulch where had a thick coat of dust abatement, leaving no pebbles, rocks or dust in the way. The path less travel rewarded me with a wonderful view of 12 Bull Elk on the hillside of East Gros Ventre Butte and left me thinking that fall is fast approaching.

Upon arrival, we were greeted by an assortment of desserts from Jackson’s own Persephone Bakery. The Clancy’s home sits on 2.5 acres with beautiful views.  Being a small world that Jackson is, my partner in crime that night, Elaine, built the home years ago and recently sold it to the Clancy’s.  It was a reunion of sorts that brought a smiling face to myself and Elaine.  However, the little addition in the back of the home was quite a treat. It was hard to miss the Garage Mahal that Dan is in the process of building, a man cave that made many of us jealous. There was a tour of the Garage for those who showed up on time. For the rest, we had a great evening socializing again and enjoyed a wonderful wind down to the evening.

Not all of the participants made it to the end, however.  There were a few of us late night stragglers that moved to the front deck to enjoy a beverage of choice and to sit around the chiminea, enjoying the light rain and entertaining conversation.

It was a great event, as usual, with great food and great company. I would personally like to thank Kitty & Charlie Brown for the appetizers, Margaret & Lou Hochheiser for the Entrée and Nancy & Dan Clancy for the desserts and pyro entertainment. If it were not for members like these who open their home to the rest of us, we simply could not have such a great event. So, until our next meeting…..Enjoy. 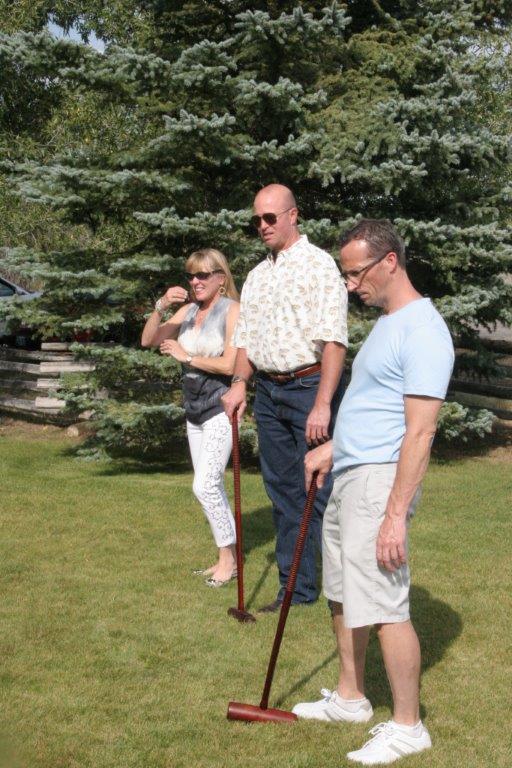