Fortunately the downpour and hail did not hit until after the Jackson Hole July 4th parade was over. So, we had a beautiful morning for the 8 cars that showed up at the Howdy Partner’s 4th of July Parade. There was a nice variety of cars as well, ranging from Dick Beck’s 56 Speedster to Carl Nagel’s 2008 911 Turbo. We were even graced with Bill & Georgette McCreary’s extremely rate ’69 912. Bill, I won’t tell anyone that I saw you putting it on a trailer down by Smith’s for your drive back down to south Star Valley.

While we all have beautiful cars, how could we stand out from all the wackiness and patriotism that the July 4th parade brings, especially, since these are German cars on America’s birthday. Enter Kitty & Charlie Brown, donning some Austrian garb and who brought their 12’ Alphorn. So with all the problem solving power of a super computer at hand, the solution…strap that bad boy onto their ’06 Cayenne, along with Charlie, strapped to the roof, and there you have it, a sight that had everyone yelling at Charlie to put his lips to the horn and blow as we proceeded along the parade route. Now, it turns out that Kitty is the one who has the knack at making the horn work, but she could only drive and yodel. I guess sitting on the car roof and blowing a horn was not what she had in mind that day.

Scot Anderson & Greg Wallace showed up in their lederhosen, kinda feeling like it was Oktoberfest, but without the mugs. Joe Bennett brought is grand-daughter Jocelyn who tossed candy to the spectators, Carl Nagel had 4 young ladies accompany him, his identical twin daughters Raines & Reagan, along with Caroline Kucera & Hailey Barlow.  Renny & Sarah Kerr also joined in their ’87 Targa.

As we proceeded down the route, I saw several club members in the audience, and even our local Porsche mechanic was seen driving a yellow VW Thing. As one can imagine, people loved our cars, or maybe they were just cheering at Charlie to put some air into that horn, you know, like when we were kids trying to get the semi drivers to blow their air horns. All in all it was a fun morning. We got recognition from announcers as we past certain points along the route, so some good marketing for the club. Maybe next year we can double our efforts and get 16 cars entered.

So, I hope that you all had a safe and sane Forth of July. See you at our next event, the Sun Valley/Redfish Lake tour/poker run. 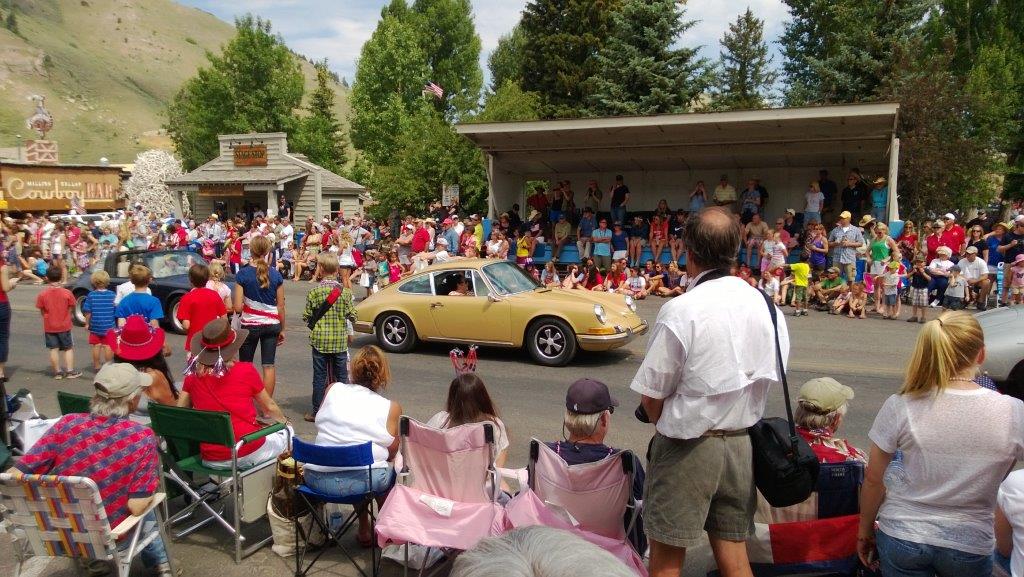