This year’s Progressive Dinner started with a bang. Or was it a time warp. Hmm, I am not sure. The drive over the pass, however, did take us to another land that many of us were not as familiar with. Or should I say – not as familiar as we’d like to be.

When we landed, we found ourselves in Elaine’s (of Greg and Elaine) home over in Teton Springs. A beautiful home built when times were going great and then they weren’t. Needless to say all the amenities were present, wood floors, granite counters and views of the golf course. Greg’s Spicy Margaritas and enchiladas were waiting our arrival and were a welcome treat. Soon Eric Weber showed with some tasty bacon wrapped peppers, exactly what we needed to wash those Marg’s down. Greg and Elaine outdid themselves as 22 of us made ourselves at home. Mixing and mingling was the activity of choice as the rains kept the golf swings to a minimum. As the appetizers and the cocktails flowed, guests were required to fill out luxury car word scramble as part of this year’s rally. All entries were then allowed to make paper chains as part of the event. Created by our very own Kristi Welfl, this year’s rally was an ingenious way to transfer the Augusta Green Jacket to a new lucky winner.

After the apps were consumed, we made our way to the second stop. Mike Mielke and Kristi Welfl’s house who had barbeque brats and burgers waiting for us. Arriving in Porsche style, we invaded Mike’s

three stall barn. I think we could have fit another 100 members easy, but it accommodated the 22 of us rather well.

With room for food and tables, it couldn’t have been nicer. Stan and Pat Siegel made some of the greatest Spanish Olive Potato Salad I’ve ever had, Mike and Kristy made a delicious Chinese Salad and I brought a secret family recipe from my mother’s brother’s sister on my father’s side, Adult Mac and Cheese, that seemed to go over well (feel free to google the recipe, I’m not sure how it made it to the web???)

The mixing and mingling was in full force and the second round of the paper chains was well under way. With specialty cocktails available to add a little color to the chains also added a little spice to the party. Red, yellow and black, the colors of the German flag, were certainly appropriate for increasing the chain length. I was told the flavor of choice for the cocktails was fireball, fortunately I maintained my stature

and limited myself to just one. As the night progressed, round three of the rally added for some great excitement. Kristy brought out the remote controlled car to test our driving skills. It was Anne Fish who showed us how to make the RC Car move. As we all challenged our driving skills, Jim Wunsch kept times. I’m not sure how many fireballs he had, but I think he forgot he was holding the stop watch and

often gave us a figure that sounded completely erroneous.

As the RC scores were tallied, dessert was served. Purchased by Dick and Val Beck, who once again showed us their undying kindness and unfortunately could not attend the event, had pre-delivered three pies from the Pie Lady of the Jackson Farmers Market and also brought us ice cream. Those pies went quick and were the perfect wrap for a great event.

Revealing RC times helped us narrow down the rally winners. It was Dwight Reppa who came in 3rd, with an RC time of 17.2 seconds. Jim Wunsch came in second with a time of 14.69. And Eric Weber came in first place with a time of 13.97. However, it wasn’t the RC time that determined the winner. It was chain length that told us who took home the jacket.

And this is where it got ugly. Both Eric and Dwight tag teamed to compete with Jim Wunsch and his wife Anne’s chain. It seemed out of nowhere Anne had a chain that could bring down the barn. And in this case, size did matter. With great debate, it was Anne that went home the victor. Dawning the Augusta Green Jacket was an easy affair as it had been won by her now new husband Jim Wunsch the year prior.

Here’s to keeping it in the family. And was Anne proud. She couldn’t wait to take that bad boy home and add her own personal touch.

“Making up a new rule,” Anne proclaimed, “all recipients are required to wear the jacket in public to keep dust from collecting over the winter months and post pictures on their face book page.” Anne was off to a good start as the very next day, Anne’s face book page showed her big beautiful smile wearing the Yellowstone Region PCA’s finest victory accoutrement. 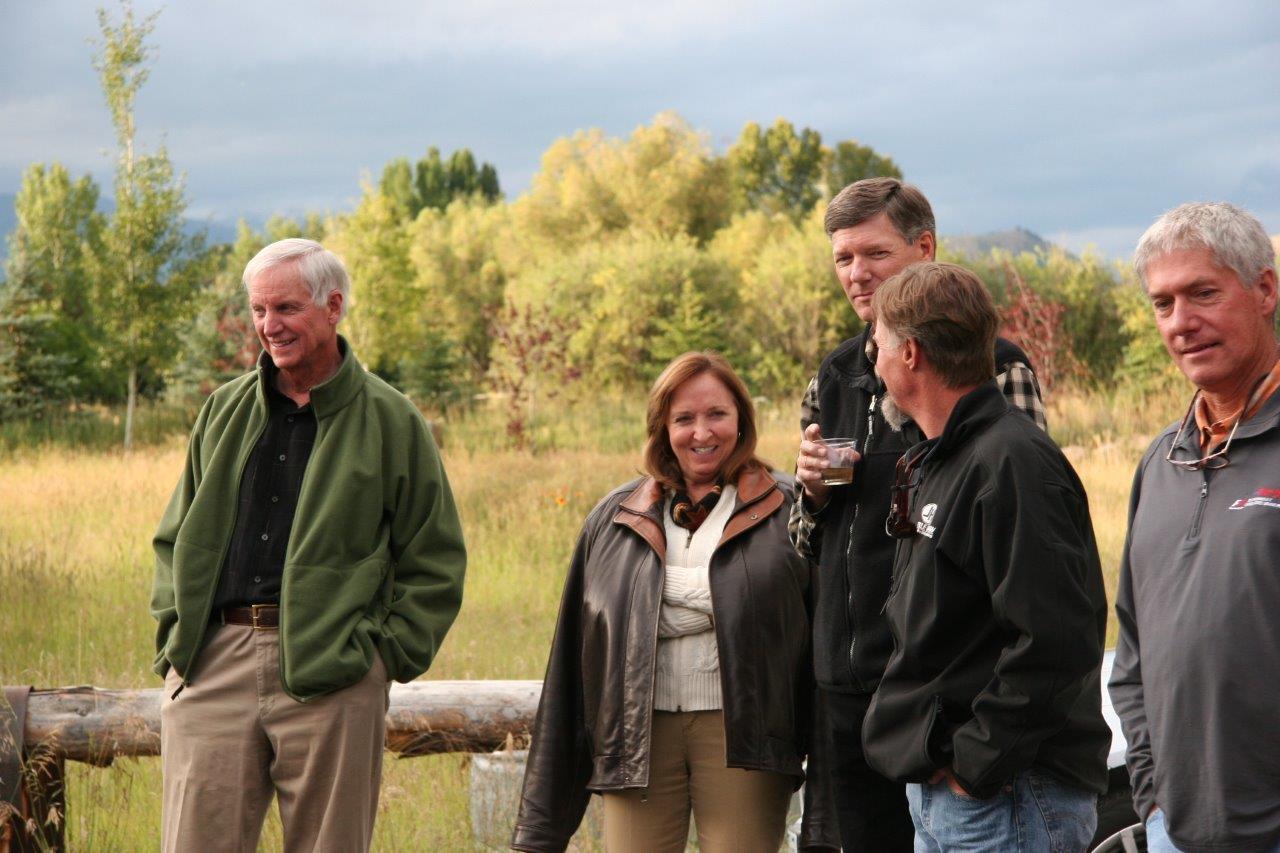