Since this was an official Yellowstone Region Club Event and the proximity to our locale was closer than any other Parade in recent history, we had twenty three members attending. There were also more than 1500 PCA members and 700 Porsches at the week-long event. Activities began with the Welcome Reception on Sunday where everyone was able to socialize, have a delicious dinner and get reacquainted.

Three Porsche Family members were there to celebrate with fellow PCA’ers. Hans Peter, Wolfgang and his son Ferdinand Porsche made themselves available for the first few days. They were most gracious and eager to speak with club members. Participating in the autocross, they showed just how familiar they are driving their cars and were very fast in their class. At the Concourse and Dinners, they were such a joy to meet and discuss our favorite subject; Porsche cars.

Club members were able to select from a variety of events to participate in during the week. Tours (both on & off road) to interesting destinations were arranged all week long. The Concourse on the Utah Capital lawn was wonderful to stroll through and view many beautiful cars. The Corall was a show all to itself, with every type of street Porsche on display. An Autocross was held at the Maverik Center parking lot. Many drivers maneuvered their cars through the twisty pyloned course. Michelin provided two Panamera’s to compare Porsche “N” rated tires vs. non “N” rated tires. By driving the cars in a spirited fashion on the autocross course, I could actually feel the difference between the two.

Robin and I entered the Golf Tournament and had a fun/hot day on the links. Robin took home the trophy for women’s long drive. Way to go! It will look great in my garage. A Driving Event at Miller Motorsports Park was sponsored by the Intermountain Region where speed junkies could blow off some steam and challenge one of the best road courses in America.

The Goodie Store and Art Show were big hits. Almost everything “Porsche” was available and many of our members did their best to help boost the ailing economy. I can’t believe the amount of merchandise Porsche fans purchase.

A 5K walk/run was held in the local park Saturday morning where a few of our members competed. The Gimmick & TSD Rally’s were a challenge with some of our members participating. Scot just missed out on a trophy in his class. Most of the couples who entered are still together (You know exactly what I mean if you have been in one). Wine and Beer tasting (with souvenir mugs to take home) were held during the week. On a very hot afternoon the beer was most welcome. Various cooking classes were offered to broaden even the most skilled chefs.

The Radio Control Car race was set up for experts and was fun to watch. Interesting Tech Sessions and Lectures were held on numerous topics. Dinners were sponsored almost every evening at the Grand America Hotel where awards were presented throughout the week. Our club won 1st place in the website contest. Ked, our Web Meister, totally redesigned the site to make it easier for us to use. Congratulations and thank you for your hard work and dedication to the club.

To finish off the week, a Parade of Porsches was held on Saturday evening. The 300 car Porsche caravan (with police escorts), began at the Little America hotel and drove through the center of the city. Salt Lake was given a chance to see what beautiful cars looks like.

Eric hosted his Go Cart GP at Miller Motorsports Park where 6 members had a fun filled 2 hours on the track. Yes, there were bragging rights for the best time, a trophy, along with a great deal of fun. First place went to Eric for the overall win. Even though this may have been rigged (since he hosted it), his driving skills were fantastic!

It was an extremely busy week with so many things to see and do. We were all exhausted by the time we left, but I can’t wait until the Parade takes place close to our Region again. 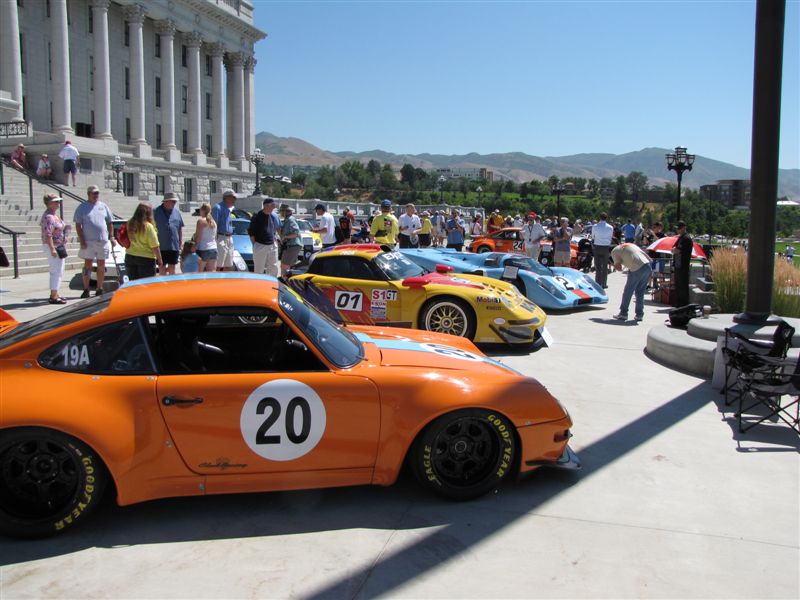